skip to main | skip to sidebar

Dear Subscribers,
I am very pleased to announce the publication of Paranthropology Vol. 7 No. 1. 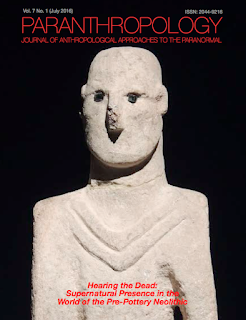 Paranthropology Vol. 7 No. 1 can be downloaded from these links:


A print version will be available soon.
It seems like a long time since the last issue of the journal was published, but we have not been idle in the gap between issues. Indeed, since the last issue two new edited volumes have been published, both of which deal with themes that are very close to the heart of Paranthropology. The first publication, Transpersonal Ecosophy Vol. 1, is an epic (https://www.amazon.co.uk/Transpersonal-Ecosophy-Vol-Clinical-Assessments/dp/132640119X/ref=sr_1_1?ie=UTF8&qid=1468449639&sr=8-1&keywords=transpersonal+ecosophy+vol) exploration of the intersections of the anthropology of consciousness, parapsychology, transpersonal psychology, ecosophy and quantum physics, edited by Mark A. Schroll. 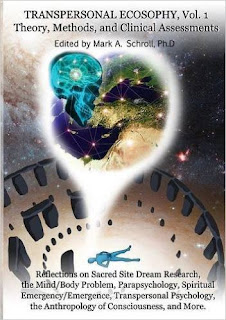 Along with Strange Dimensions: A Paranthropology Anthology (https://www.amazon.co.uk/Strange-Dimensions-Jack-Hunter/dp/1326360108/ref=sr_1_1?ie=UTF8&qid=1468449710&sr=8-1&keywords=strange+dimensions+jack+hunter), this book is one of the first publications of the new Psychoid Books imprint (www.psychoidbooks.co.uk). 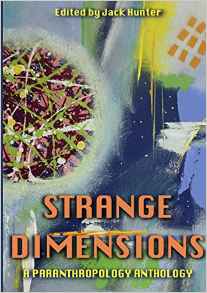 The second publication I would like to mention here is my own edited collection Damned Facts: Fortean Essays on Religion, Folklore and the Paranormal, published by Aporetic Press (https://www.amazon.co.uk/Damned-Facts-Religion-Folklore-Paranormal/dp/9963221424/ref=sr_1_1?ie=UTF8&qid=1468449748&sr=8-1&keywords=Damned+facts+jack+hunter). This book was initially intended as a means to determine what a Fortean religious studies would look like. To this end it features articles ranging from comparisons of the work of Charles Fort and William James, research on the links between UFO sightings and fairy folklore (a la Jaques Vallee), right through to examining John Keel’s influence on the Occult revival and analyses of personal psychedelic and psi experiences. It is well worth getting hold of, and the introduction has been reproduced in this issue. 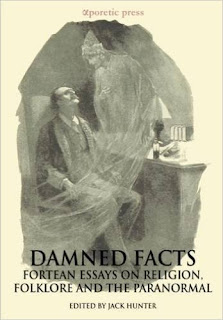 I hope you enjoy these publications.

I am very happy to announce that Paranthropology Vol. 7 No. 1 has finally been published. It is a great issue:

Edith Turner and the Anthropology of Collective Joy - Paul Stoller

Hearing the Dead: Supernatural Presence in the World of the Pre-Pottery Neolithic (PPN) in Reference to the Balikligöl Statue - Alistair Coombs

The Uncanny and the Future of British Quakerism - Ben Wood

Intermediatism and the Study of Religion - Jack Hunter

REVIEW: “Ayahuasca Shamanism in the Amazon and Beyond” by Beatriz Caiuby Labate & Clancy Cavnar - Gerhard Mayer

REVIEW: Do we need the paranormal to explain the UFO phenomenon? A Review of Illuminations: The UFO Experience as Parapsychological Event by Eric Ouellet - Jean-Michel Abrassart

I am pleased to announce the publication of Paranthropology Vol. 6 No. 2! It’s a little bit delayed, owing to a range of factors, but I think you’ll agree it was worth the wait.

To begin, Jennifer Lyke presents an insight into the cosmological understanding of US mediums based upon phenomenological investigation and analysis.  Then Brian Taylor continues the theme of taking experience seriously with his very personal exploration of ‘Soul Birds’ as part of his wider ‘animic’ reality. Next Brooke Hansen and colleagues explore the paranormal beliefs and experiences of students and staff at Ithaca College and uncover some fascinating and revealing data. This is followed by Elliot Benjamin’s agnostic auto-ethnographic approach to the study of mediumship, in which he describes his own experiences participating in events at a Spiritualist Church. We then have two reviews, one from Jules Evans of the psychedelic conference Breaking Convention, and the other from T. Peter Park of the New Jersey UFO/Paranormal Spring Conference. To finish we have the abstracts from a recent round-table discussion on ‘The Emerging Field of Paranthropology,’ which took place at the 58th Annual Parapsychological Association Conference. 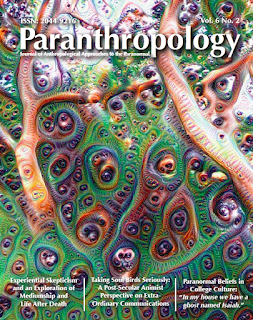 All links to free downloads of the issue are available by following the link below:

I am also very excited to announce the publication of Strange Dimensions: A Paranthropology Anthology, which celebrates 4 years of the Paranthropology Journal. It features 16 chapters (plus an introduction and a foreword by Joseph Laycock), covering everything from William Burroughs to Crop Circles to dowsing, via alien abductions, consciousness studies, mediumship and surfing.

If you have enjoyed the journal, or found it useful, over the last 5 years (that’s 20 issues!), please consider buying a copy of the anthology, as it is the very best way to support its continued existence. It is an excellent collection of some of the best articles from the last two years, over 400 pages of anomalous goodness!

Buying directly from Lulu is the best option if you want to support the journal, but purchases via Amazon and other retailers are also good. 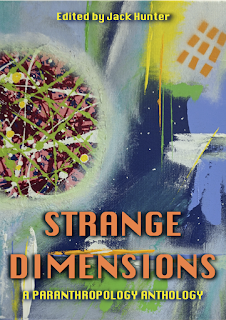 "Once again, Jack Hunter takes us down the proverbial rabbit hole, here with the grace, nuance and sheer intelligence of a gifted team of essayists, each working in her or his own way toward new theories of history, consciousness, spirit, the imagination, the parapsychological, and the psychedelic. Another clear sign that there is high hope in high strangeness, and that we are entering a new era of thinking about religion, about mind, about us."

-- Jeffrey J. Kripal, author of Authors of the Impossible: The Paranormal and the Sacred.

Thank you, and I hope you enjoy Vol. 6 No. 2 and Strange Dimensions!

CFP: Fortean Approaches to the Study of Religion

CFP: Fortean Approaches to the Study of Religion (Deadline for Abstracts June 15th 2015)

Damned Facts: Fortean Approaches to the Study of Religion

Over the course of four intriguing books (The Book of the Damned (1919), New Lands (1925), Lo! (1931), andWild Talents (1932)), Charles Hoy Fort meticulously collected hundreds of accounts of anomalous events documented in scientific journals and newspapers, including such unusual occurrences as fish falling from the sky, poltergeists, unidentified flying objects, levitations, mysterious objects, disappearances, ball lightning, and so on. Throughout all of his works, Fort employed the philosophy of intermediatism: “that nothing is real, but that nothing is unreal: that all phenomena are approximations in one way between realness and unrealness.” Through this rigorously agnostic epistemology Fort was able to explore some exceedingly strange territory, unearthing phenomena (what he called “damned facts”), that mainstream science had rejected outright, and in so doing inspired others to employ a similarly Fortean approach in their own writings. This collection draws together scholars who have taken a Fortean approach to the study of religion, itself a category filled with a wide range of weird and anomalous accounts: from miracles, encounters with supernatural beings, and self-mortification, to stigmata, spirit possession and mystical experience.

Submissions of abstracts on areas related to the following would be greatly appreciated:

These are just a few ideas, and I would be more than happy to hear other thoughts or suggestions for possible chapters that would fit within the general theme of the book.

If you have any ideas or questions please don’t hesitate to get in touch, I can be contacted via: discarnates@googlemail.com

Deadline for Abstract Submissions and Expressions of Interest: June 15th 2015.

The book is currently under consideration by Aporetic Press (https://aporeticpress.wordpress.com/about/)

Bio: Jack Hunter is a doctoral candidate in the Department of Archaeology and Anthropology at the University of Bristol. His research takes the form of an ethnographic study of contemporary trance and physical mediumship in Bristol, focusing on themes of personhood, performance, altered states of consciousness and anomalous experience. In 2010 he established Paranthropology: Journal of Anthropological Approaches to the Paranormal, as a means to promote an interdisciplinary dialogue on issues relating to paranormal beliefs, experiences and phenomena. He is the editor of Paranthropology: Anthropological Approaches to the Paranormal (2012) and Strange Dimensions: A Paranthropology Anthology (2015, forthcoming), both of which gather some of the best articles from the first four years of the journal. He is the author of Why People Believe in Spirits, Gods and Magic (2012), a beginner's introduction to the anthropology of the supernatural, and co-editor with Dr. David Luke of Talking With the Spirits: Ethnographies from Between the Worlds (2014). 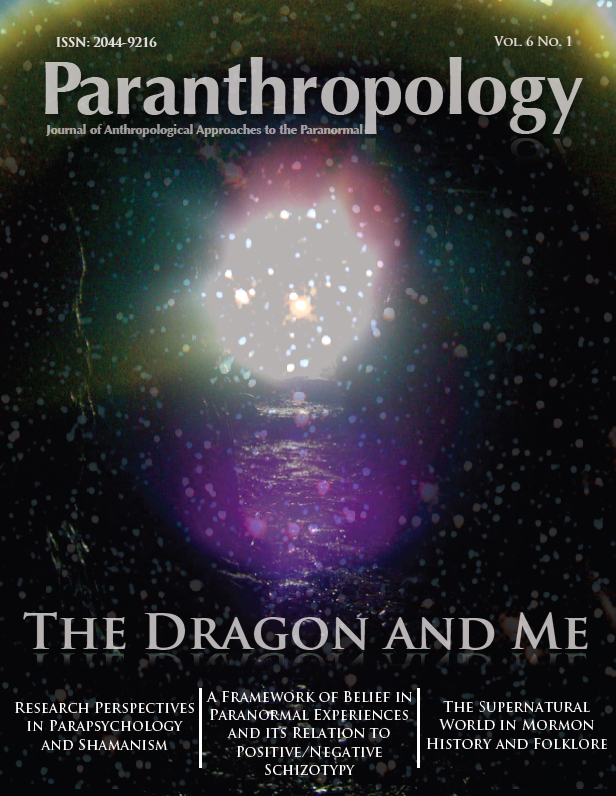 I am pleased to announce the publication of Paranthropology Vol. 6 No. 1, available to download from the following site:


The Dragon and Me: Anthropology and the Paranormal  - Susan Greenwood

On the "Types" and Dynamics of Apparitional Hallucinations - S. Alexander Hardison 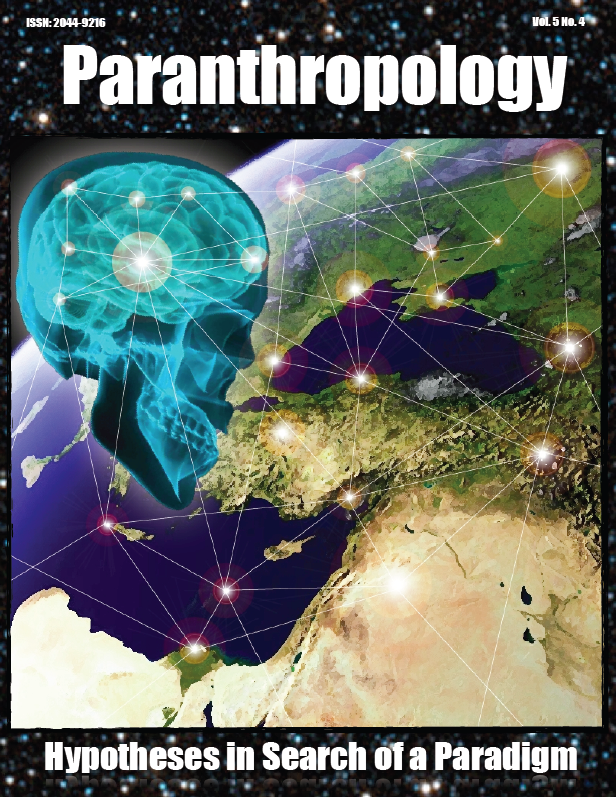 Differentiating Experiences from Events, and Validity from Authenticity in the Anthropology of Consciousness - Stanley Krippner & Mark A. Schroll

Reflections on Methodological Concerns in the Anthropology of Consciousness: A Response to Krippner & Schroll - Hillary S. Webb

Interplay of Perspectives in the Anthropology of Consciousness: A Commentary on Krippner & Schroll - Susan Greenwood

Whose Dream Is It Anyway? A Commentary on Experiencing Dream Telepathy (or Non-local Memory): A 50 Year Retrospective Autobiographical Analysis - Zelda Hall

Bohm’s Influence on Ullman’s Theory of the Origin of Dreams: Reflections and Insights from Montague Ullman’s Last Interview - Mark A. Schroll

Epilogue: Toward a New Paradigm of the Varieties of Transformative Experience - Mark A. Schroll & Darlene Viggiano. 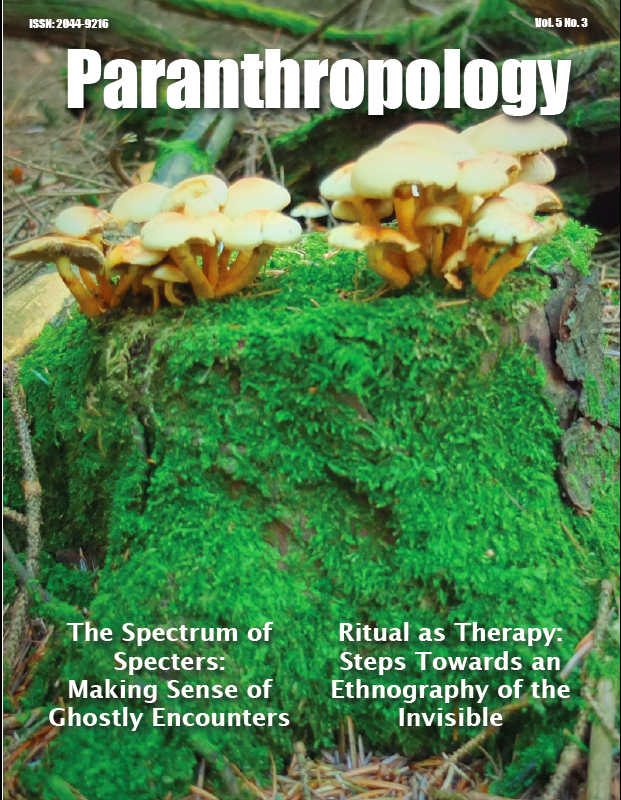 The Witch from “His-Story” to “Her-Stories”: Changing Contexts - Matt Coward

The Complexities of Evaluating  Evidence for “Psychic” Effects:
Spontaneous Case Research in Parapsychology and Some Considerations for Progression - S. Alexander Hardison

Ritual as Therapy:  Steps Towards an Ethnography of the Invisible - Peter Mark Adams

ABSTRACTS: ‘Research Among Spirits, Ghosts and Deities: How to Study Non-Ordinary Realities’ - Panel at BASR Annual Conference, The Open University,  September 2014

REVIEW: ‘Talking With the Spirits: Ethnographies from Between the Worlds’ Edited by Jack Hunter & David Luke - William Rowlandson 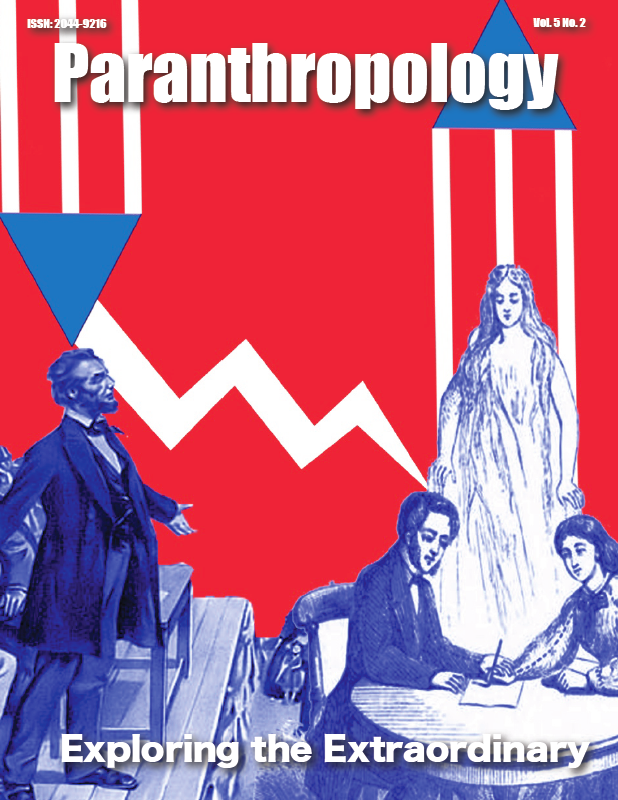 Here it is, finally, Paranthropology Vol. 5 No. 2, co-edited with Dr. Hannah Gilbert. Featuring:

Magic or Science: A Look at Reiki in American Medicine - Joshua Graham

Communication Across the Chasm:Experiences With the Deceased - John A. Napora

Orbs, some definitive evidence that they are not paranormal - Steven T. Parsons

'Talking With the Spirits' - New Edited Book on Spirit Mediumship 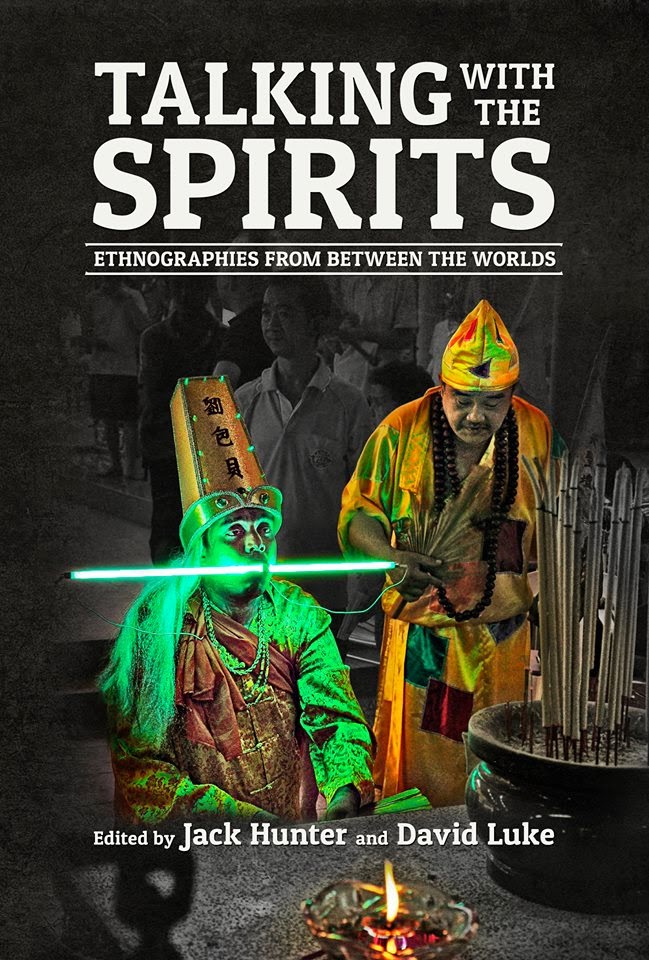 I am pleased to announce the publication of 'Talking With the Spirits: Ethnographies from Between the Worlds’ a collection of 12 essays exploring spirit mediumship traditions around the world.
Edited by Jack Hunter & David Luke, and featuring chapters from Fiona Bowie, Hannah Gilbert, Deirdre Meintel, Jack Hunter, Tamlyn Ryan, Barbara Stockigt, Diana Espirito Santo, Bettina E. Schmidt, David Luke, Everton de Oliveira Maraldi, Wellington Zangari, Fatima Regina Machado & Stanley Krippner, Charles F. Emmons and Fabian Graham.
‘What happens when a largely tabooed method (comparativism) hones in on a completely tabooed subject (spirits)? This. Astonishing possibilities, insights, and new directions follow in the wake of these essays, which demonstrate again and again both careful ethnographic description and a most remarkable open-mindedness with respect to the phenomena themselves. What some are calling the “ontological turn” in the humanities just got a bit sharper.’
- Jeffrey J. Kripal, PhD, author of Authors of The Impossible: The Paranormal and The Sacred.
The book is available to order for £19.95 from Amazon UK, or $26.99 from Amazon US.
http://www.amazon.co.uk/Talking-With-Spirits-Ethnographies-Between/dp/0987422448
http://www.amazon.com/Talking-With-Spirits-Ethnographies-Between/dp/0987422448
at 04:17 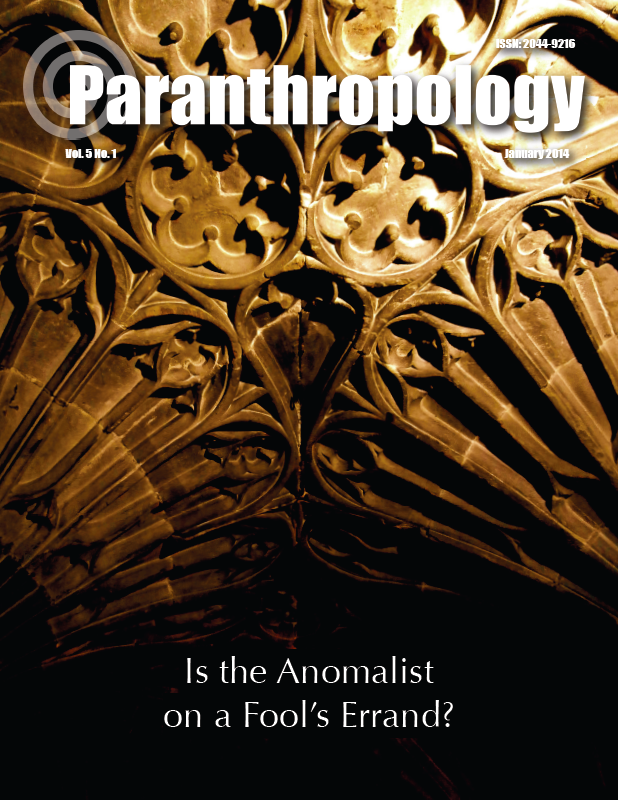 "Is the Anomalist on a Fool’s Errand?" - Thomas E. Bullard

Paranthropology Vol. 4 No. 4 (October 2013) is now available to download for free: 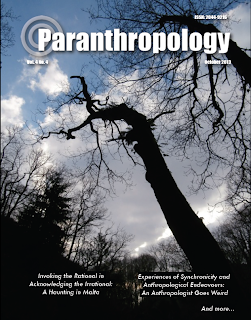 "Harry Potter and All That: Children’s Understanding of Magic" - Simon Dein

"Invoking the Rational in Acknowledging the Irrational: A Haunting in Malta" - John Micallef

"Anthropology and the Paranormal: Report on a Symposium at the Esalen Institute" - Fiona Bowie

Most activity here has shifted to "Paranthropology: Journal of Anthropological Approaches to the Paranormal" (www.paranthropology.co.uk)
e-mails can be sent to: